Anna Carey tells us about the compelling research process for her latest novel The Making of Mollie!

When I started writing my book The Making of Mollie, the story of a would-be teenage suffragette in 1912 Dublin, I didn’t have to think long about where to set it. When it was founded back in 1883, my old school, Dominican College, was at the forefront of girls’ education in Ireland, and it was known for its progressive ethos – its old girls include the famous suffragette leader Hanna Sheehy-Skeffington. Since 1984, the school has been on Griffith Avenue in Drumcondra, but for just over 100 years it was in Eccles Street in Dublin (when I was there, from 1988 to 1993, lots of people still referred to the school simply as ‘Eccles Street’). As my fictional heroine, Mollie, was a middle-class girl living in Drumcondra, it made sense that she would have gone to Eccles Street – which was handy for me, because I live down the road from the school’s current location.

And so a rainy day in February, I went back to school, thanks to Sr Catherine Gibson, the nun (and former teacher at the school) who looks after the archive. In a cosy room in the convent next to the school building (I’d walked past it every day for five years but never entered it before), I ate biscuits, drank a particularly delicious pot of tea, and immersed myself in the past. Dominican College began producing a yearbook called The Lanthorn in 1913, and there was a complete collection in the archive. I was able to pore through the pages for several hours, taking copious notes and photographs and finally photographing entire pages.

The Lanthorn was an incredible source of information. It told me what subjects the girls studied at school, some of which were mystifying over a century later (historical geography?). It showed me that the girls called their lay teachers “professor” (the historian Dr Senia Paseta later told me this wasn’t unusual). In the school class lists, it gave me dozens of authentic girls’ names of the period which inspired the names of many characters in the book (there were several Mollies, a LOT of Noras – and yes, at least one Grace and Stella and a few Gerties). There were accounts of “a year in Eccles Street” which told me when the girls had exams and when they put on plays (which they seemed to do surprisingly often). Best of all were the short stories about school life by the girls themselves, which were often very funny and which provided me with a lot of authentic contemporary slang. They were the parts I enjoyed the most.

The Making of Mollie is my first historical novel, and I cared a lot about making it as authentic as possible while still being entertaining. So it’s a good thing that I turned out to love the research. In fact, in an ideal world I’d have spent even longer on it. And no part of the research was more fun than throwing myself into the world of the girls who’d gone to my school 75 years before I did – and seeing they weren’t always so different from me and my friends after all.

The Making of Mollie is available here and in all good bookshops! 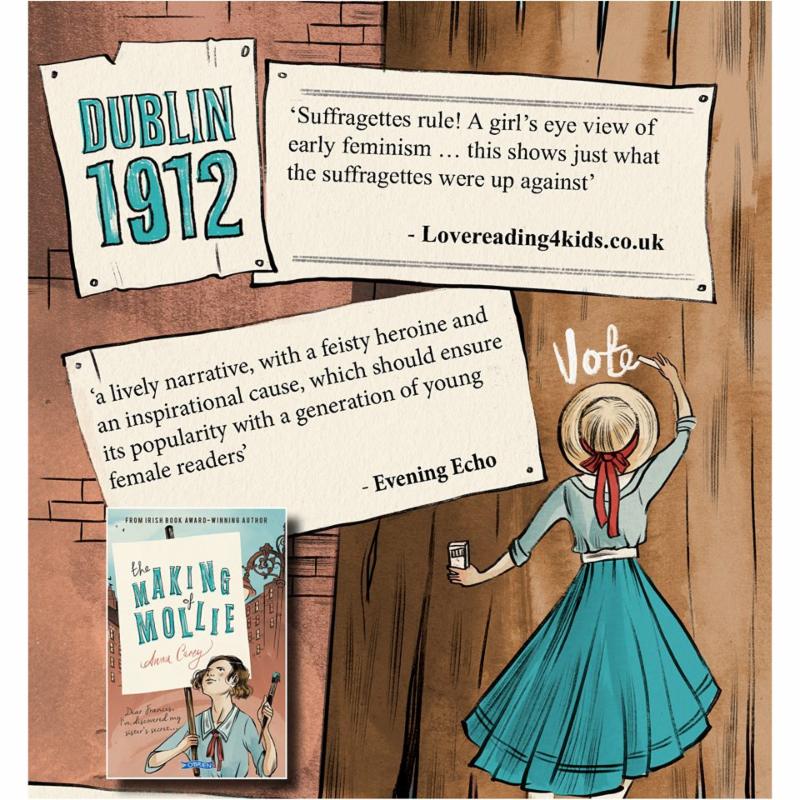